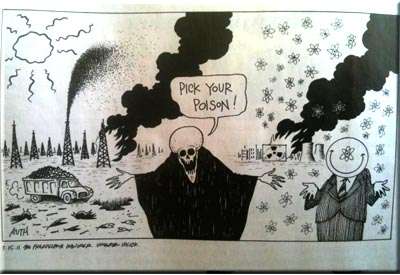 Pick Your Poison!  Or just let it be picked for you!

We wanted to write this month about the pitfalls of the solar lease (we know, it sounds exciting), but with all the perils in the world at the moment, we just couldn’t)

The earthquake and tsunami destruction in Japan is almost too overwhelming to comprehend.  The sheer magnitude of the loss is staggering, depressing, and beyond words. We feel terribly for those who where lost and for those left behind with a world shattered beyond recognition. We’d like to reach out to survivors and say the worst is behind them and give them comfort in knowing as they grieve, that we are here to help them rebuild their lives. Sadly, that is not the case.  The world continues to watch in horror as the damaged nuclear power plant that hampered rescue efforts, grows worse by the day, causing thousands to be relocated, and quietly releases radiation into the air and water.  Rebuilding lives within miles of the Fukushima plant is now generations away.

As an alternative energy advocate, maybe it’s easier for me to point at nuclear energy and say it’s not worth the risks.  But looking at our national response, I see it’s not so easy for others.  The nuclear lobby is strong.  The dollars invested are massive.  But we, the souls effected, the bystanders of any nuclear accident have a right to stop this dangerous energy production.  With the recent global economic collapse and now this 9.0 earthquake and tsunami we as a global community should be able to agree on one thing.  Things have a way of getting a lot worse than our economic models and our modern imaginations can comprehend.  Going forward, we have to look at the real costs of the energy we use: human, financial, and environmental.

Somehow our energy addiction has allowed us to collectively accept that the byproduct of properly functioning nuclear energy is radioactive waste that needs to be “securely” stored for a millennium or so. The byproducts of properly burning oil and coal are pollution and airborne health risks, not to mention the environmental effects.  Those are the accepted byproducts from normal production, and if not bad enough, we now can’t deny that normal production will continue to be disrupted by natural and manmade disasters with epic consequences ranging in scope from the loss of life and livelihoods, the loss of natural habitat and communities, and of course costing billions and billions of dollars worldwide.  The obvious truth is that our current energy policy, or poison policy, is in a word, destructive.  We claim these energy sources are vital to our economy, yet with every barrel of oil, ton of coal, and nuclear powered kilowatt used, we are causing real measurable harm on the good days, and mass destruction on the bad ones.  Why in this day and age of technology and shared information, do we collectively choose to turn a blind eye to reality?  Why accept the wars and the health risks?  Why do we continue to support these products and building these industries up when we know they cause such disastrous repercussions?  Or are we all just lazy when it comes to energy,  willing to accept the drip feed of power despite what we know about its poisons.

I was watching the evening news last week, and the energy industry “expert” said, “every energy source has its risks, oil and coal pollute the air (causing millions to die each year), nuclear has radiation (that can cause decades of illness and birth defects), and there aren’t enough alternatives to currently power our electricity needs.”  Amazing.  “Not enough alternative energy” is a risk on par with oil spills, air pollution, and radiation? Here’s a crazy idea on par with all this energy insanity, let’s produce enough energy from clean energy sources.   Out of denial and into solutions.

The cost per kilowatt hour from solar was already cheaper than from nuclear even before this disaster.  Where will the cost go from here?  The cost of oil is subsidized and the money spent on the clean up and health effects ignored in its cost.  Simply put, we have been hell-bent on protecting oil production despite all the bad it knowingly does.  If you look at the real picture, the real world we live in, the one that has earthquakes, tsunamis, floods, and hurricanes , the best energy sources are the natural, abundant, never ending, clean sources, not just because they are clean, but because they costs less, in the short and long term.  There is not a damaged Solar Array in Japan contaminating the grass, the cows, and the milk in Oregon.

Despite what the lobbyist and talking heads say, it’s not a jobs issue either.  Investing in a clean energy policy expands the economy and adds jobs.  We don’t blame the oil, coal, or nuclear companies for protecting their billions invested in growth expectation or projected profit.  They need not worry, even if we all wanted an electric car, we would be decades away from being able to pull it off.   No, let’s recognize our addictions for what they are,  really, really, really bad habits, and decide to collectively kick them.  Addiction by definition is hard to stop, but we are being sold a bill of goods that we can’t have a healthy economy and a lifestyle we enjoy based on clean independent energy.

Talking with a fellow energy professional this week, he exclaimed in frustration that “The transfer to clean energy would only take one generation.”   But the question we have to ask ourselves is who’s generation?    We know it’s a needed transition, or at least, we know a world without such dangerous energy sources would be preferable.  But who has the reins on this? President Obama spoke this week about our national energy policy, putting investment into drilling for U.S. Oil over importing oil, importing Canadian and Mexican Oil over Middle East Oil, and to turning to bio fuels and alternatives.  This is a good slow and steady reduction in at least Imported Adversarial Oil, with an ultimate goal of less oil emissions and security.   This is better than no plan and is heading in the right direction.  While we’d like more we understand that this is probably as robust a plan as our government can promote. The lobbyist, the pocket partisanship, the misinformation and energy fat, drip fed public, it’s probably about all we can muster.  But sadly we need to do more.   If not, be prepared for more epic annual deaths and destruction worldwide.

Please know your energy options and promote energy conservation and change.  As we argue about global warming and the best way to “kill” a runaway oil well, please don’t ignore the elephants in the living room.

We hope that this doesn’t seem incentives to those suffering in Japan.   Please let us all learn from the global disasters and demand the energy sources without such risks.