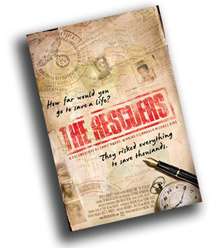 King of the World

After his film The Rescuers won Best of the Fest honors at the 2011 Palm Springs International Film Festival, Director/Producer/Writer Michael King of La Quinta has traveled the world. His documentary about 13 diplomats who saved the lives of tens of thousands of Jews during World War II has screened in venues far and wide. In April, the United States Mission to the Organization for Security and Cooperation in Europe held a screening for 58 ambassadors and high-ranking diplomats in Vienna, Italy. In May, King attended a screening at the Cannes Film Festival in France and was a guest of honor at the Jewish Film Festival in Zagreb, Croatia. He also attended screenings in Bratislava, Slovakia, and Bucharest, Romania.

Let the Sun Shine In

We must think of solar panels on houses as a standard appliance, asserts Beverly Hills-based developer Alta Verde Group, which partners with locally based Hot Purple Energy on projects such as Escena Golf Club and Monte Sereno in Palm Springs and Coral Mountain in La Quinta. Their collaboration aims to bring “a strong modern aesthetic that incorporates passive solar features and orientations” to virtually eliminate energy costs, according to builder Anthony Poon.

In May, a street vendor in Little Rock, Ark., sold five hot dogs in 90 minutes at a price of $1,501. “Hot Dog Mike” Juiliano skipped the sauerkraut, chili, and mustard in lieu of lobster tail and saffron aioli and (perhaps to nudge the price up) gold flakes. Rather than run to the bank with his profitable lunchtime business, Juiliano donated $1,500 from each sale to The One Inc. to benefit local homeless outreach. Of course, that explains why he charged the odd dollar; after all, a guy’s gotta make some money, right?