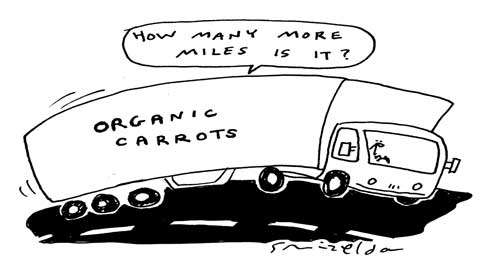 As you know by now at Hot Purple Energy we not only promote the benefits of clean energy but also the benefits of conservation.  When we find something wasting energy in a client’s home we recommended treating the problem not just prescribing a larger solar cure.   This is an energy consumption solution, but also a life style choice…

Recently, I read that according The Centers for Disease Control, three quarters of US health care spending goes to treat chronic diseases, most of which are preventable and linked to diet: heart disease, stroke, type 2 diabetes, and at least a third of all cancers.   This is a staggering statistic and one that has many possible reasons, but a seemingly simple solution. We need to eat better food.

But the sad truth is that simply eating a “balanced diet” with fruits and veggies won’t cut it anymore.  Its gotten to the point where we need to be more selective in where our food comes from and how its grown.  The word on the environmental street is that our food is full of hormones and antibiotics, our seeds are bioengineered and patented by chemical companies, and to keep fruits “in season” year round, they are shipped from thousands of miles away losing much of their nutrients in transit.

So much for an apple a day.  You make the right decision to eat well and the food is still bad for you.  It looks great but is crap and is quite frankly an environmental disaster.

As a nation we have a lot to rework when it comes to commercial growing and it appears we are trying.  See the Agriculture Secretary Tom Vilsack “Know your food, know your farmer” (http://www.youtube.com/watch?v=Tms8ye8mw_k)  But as always it starts with us.  Each of us needs to pay closer attention to the food we eat.   The best way to do this is to eat organic and eat locally grown food.  It’s the surest way to truly healthier diet and will keep your dollars in the local economy and you won’t be paying for dirty fuel shipping and large chemical companies’ profits.

A link I find helpful and would like to share is http://www.localharvest.org/. It will take you to the local farmers markets, shops, products, etc.    Buying locally grown food is a simple cure for a huge problem we have in this country.  But the best part is the food is better for you and the environment…oh and tastes better too!

PS:  We are lucky here in the desert to have so much locally grown food, but here is a list, taken from a University of Tennessee Knoxville guide, of natural harvesting times for fruits and vegetables in North America: