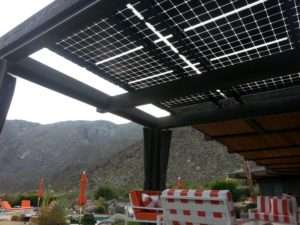 CCAs allow cities to enter into their own power purchase agreements with power providers of their choosing, rather than piggybacking off the power contracts made by SCE, and this allows CCAs to both choose more environmentally friendly power producers and charge less to their rate-payers for the power (i.e. the “generation” charges on your bill). DCE customers will still use Edison’s grid and infrastructure, which is why DCE customers will pay the same for the “delivery” charges on their bill as Edison customers.

The other caveat of note with DCE is that customers can choose to pay a little bit extra to get their energy from 100% carbon-free sources under the “Carbon Free” rate (versus the 35% carbon-free mix that other DCE customers on the default “Desert Saver” rate will receive) – this is a purely voluntary opt-in rate which compares to the default “Desert Saver” rate as follows:

Other than that, it seems that everything else for DCE customers – as it relates to solar – should be the same. For solar customers that went solar after July 1, 2017 (who are all on mandatory time-of-use billing, 99% of whom are on TOU-D-A) or for other solar customers who have chosen to switch to time of use billing, here’s a comparison of SCE versus DCE’s two rates:

Long story short, for most of you the impact of this change will be small but because DCE’s rates will be slightly less than SCE’s, what remains of your electric bills with solar may go down further.